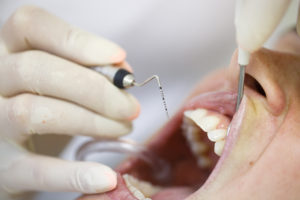 The following is an excerpt from TLC4Gums founder Dr Gordon Wilson’s new book, “The Secret Techniques to Eliminating Gum Disease without Surgery”.

If you’ve ever watched the movie, “Rudy”… that was pretty much my story, just with a different football team.

Then reality set in.  With the Army Reserve only paying for 50% of my tuition, and student loans picking up the other 50% of tuition, there were other expenses to consider… room and board, car expenses, food, etc.  In September of 1989, I made the hardest decision of my young life.  I quit the team to take a job.

I began working in a dental lab, making teeth.  I really enjoyed it and I learned quite a bit about teeth.  Prior to that, my only work experience had been manual labor sunup until sundown on the farm and working construction in college before playing football.  Working indoors was a really nice change of pace!

During this time, I developed a wicked case of gingivitis, and my gums began to bleed like crazy.  I was doing everything that I’d been taught to do my whole life… brush after every meal and floss twice a day.  I even started flossing 3 and 4 times a day and brushing my teeth while in the car driving to and from work and school.  I started using mouthwashes and even brushing with a European tooth powder that I’d found in a local health food store.  I noticed that my teeth were definitely whiter but my gums were still bleeding.  Nothing helped.  I could place my tongue against the roof of my mouth and my upper teeth, create suction and my entire tongue would be filled with blood.

Finally, out of desperation, I approached the dentist in my army reserve unit.  I showed him my neat little “tongue-full ‘o blood” trick, and asked him what was wrong with my gums.  I described everything I had done to try and stop the bleeding.  The first thing out of his mouth was, “Are you getting enough sleep?”

Of course I wasn’t getting enough sleep.  I was working full time at the dental lab, attending school full time, and drilling with my army reserve unit one weekend every month.  I was sleeping from 9:30PM to 3AM every night and then taking a short nap around noon every day.  He told me, “Until you return to a normal pattern of sleep, your gums are just going to continue bleeding.”

To book a consultation at Arizona Periodontal Laser or to get a copy of the book, contact us today.