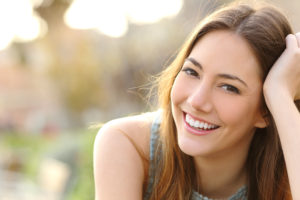 I ultimately realized that I needed to get all of our patients on the same page with their homecare.  The only way for all patients to achieve excellent results is for ALL patients to have excellent home care after we have done an excellent job of removing the tartar for them.  In my quest for excellence, I discovered a patented oral appliance that delivers medication directly to the source of periodontal infections – the base of the periodontal pocket.

In March of 2008, I was attending a 4-day symposium just outside of Las Vegas.  Between courses, participants were encouraged to visit the various vendors outside the seminar rooms.  One particular vendor caught my eye, as it dealt with periodontal disease.  Unfortunately, there was nobody in the booth and no additional information on the company.  I asked the vendor in the next booth over if he knew anything about this company.  He told me that it was “a mouthpiece that treats gum disease”.

My immediate thought was, “That’s the dumbest thing I have ever heard in my entire life.” As it turned out, the owner of company (the man who had invented and patented the oral appliance) would be giving a 4-hour lecture at the symposium a couple of days later.  I decided to attend

his lecture, and it was one of the best decisions I have ever made.

At first, I was extremely skeptical.  My whole demeanor was crossed off.  I sat back in my seat with my arms folded and thought to myself, “This is going to be a complete waste of 4 hours”.  By the time his lecture was over, I had gone from laid back and crossed off to sitting on the edge of my seat practically jumping up and down with excitement!  I admit it… I’m a geek!

What he had been saying in that lecture made so much sense to me… killing the anaerobic bacteria with oxygen.  He was using hydrogen peroxide as the primary antimicrobial agent to oxidize the bacteria.

I instantly remembered back to a decade before when I was irrigating with Superoxol to aid me in the technique of hemostasis with the patented laser procedure.  I recalled how pink and healthy the gingival tissues looked at the postoperative evaluations.  I became very excited that the inventor of this oral appliance was also having great success with hydrogen peroxide.  However; what really sold me were his results… his results were better than mine.  Whenever someone is better than me at something, I pay attention to what they have to say!

I flew home from the symposium on Sunday evening, and the first thing I did on Monday morning was roll my laser into the closet.  There it sat for the next 3 months, collecting dust, as I dove headfirst into this revolutionary, non-invasive treatment.

I followed the suggested flowcharts for this new “mouthpiece” treatment,  Over time I came to realize that while this new treatment was effective, it was very time- consuming and nearly impossible for patients to adhere to the recommended homecare.

About 3 months after using this new treatment, a patient told me that he wasn’t going to do the treatment anymore because it was consuming his life.  At this point, he had been in treatment with the oral appliance for over 6 weeks, wearing them every 3 hours for 15 minutes.  His deepest pocket was 15mm when he started.

Now, 6 weeks later, the 15mm pocket had decreased to 12mm deep.  He explained to me that as an attorney, most of his day revolved around being in the courtroom, and he said to me, “I’m in court all day.  I can’t keep calling for a recess to put these damn things in my mouth.  You need to do something about this.”.

I said, “No problem.  Let’s numb up the site and I will use my laser on your gum tissue”.  A few minutes later he was numb, and shortly after that I had ablated the diseased epithelial gum tissue with my laser, root planed his tooth and he was off to court.

One week later he returned for a postoperative visit.  His gums were completely healed and you couldn’t even tell that he’d had the laser microsurgery.  When I measured the pocket, it had shrunk from 12mm to 6mm in one week!

That’s when I realized that I was onto something special.  I realized that people in today’s society want to obtain amazing results and they want them yesterday!  They also want to participate

as little as possible in obtaining those amazing results.

At this time, I began to experiment with variations of the different treatment modalities I had learned over the previous decade.  I started using a combination treatment that incorporated the traditional methods in conjunction with the new methods until I had perfected what is known today as Therapeutic Laser Care for Gums, or TLC 4 Gums, or simply TLC.

I developed a simple classification system for the various stages of this gum condition based solely on pocket depth and bleeding.  Over much of the last century, researchers and clinicians have struggled to agree on a universal classification system of the various forms of this condition.  This has resulted in frequent changes and revisions that, quite frankly, seem to cause more confusion than guidance.  The one thing we can all agree on is this:  The deeper the periodontal pocket and the more the gums bleed; the more severe the condition.  That’s why I based my classification system on pocket depth and bleeding.

In December of 2008, I was sitting in my office evaluating the office results of 2008 and mapping my goals for 2009.  It was 8:00 PM on a Friday and night and the phone rang.  My first thought was, “Don’t answer that.  You don’t want the person on the other side of that line to know that you’re in your office at 8 o’clock on a Friday night because you have no life!”.

However; curiosity got the best of me and I looked at the caller I.D.  I quickly realized that the person calling me was calling from St. Louis, MO.  I thought to myself, “Wait a minute… It’s 10 o’clock on a Friday night in St. Louis… THIS person has no life!”.  I answered the phone.

On the other end of the phone was the inventor of the patented oral appliance.  He asked me what I was doing, and when I asked him for clarification he said, “I was just on your website and I saw the results you’re getting.  They’re better than mine!  What are you doing?”.

My mind immediately raced back to when I was harshly scolded by the two inventors of the patented laser procedure, and the last thing I wanted was to be scolded by this man.  I told him, “I’ll tell you what I’m doing, but you have to promise me that you won’t get angry.”.  His response was, “Okay, I promise.”.  I told him, “I ditched your protocols and I came up with my own.”.  His next response took me by surprise.  He said, “I want them.”.

We decided that we would partner up and teach my TLC protocols to dentists across the country.  We spoke sporadically over the next couple of months trying to hammer out the details of our partnership, when he introduced me to his daughter, Tanya.  She had been instrumental in helping him obtain the patent for his oral appliance.  One day as I was talking to her, she said, “Wait a minute.  You developed your own classification system?”.  I replied, “Yes.”.  She then asked, “Each of your 5 classifications has a different protocol?”.  Again, I replied, “Yes… Each classification

I asked her what she meant.  She explained, “Our patent is for a medical device only.  We can only teach doctors how it works and they have to figure out for themselves how they’re going to incorporate it into their practices.  We can’t tell doctors specifically how to use it… but you can!”.  That’s when I developed my Perio 101 course that teaches dental offices the TLC protocols.  Now Tanya refers dental offices to me so that I can help them be successful in eradicating gum decay from their patient populations.

As a clinician, my goal is to help you save your teeth so that you can be healthy and enjoy them for the rest of your life.  The number one cause of tooth loss is periodontitis. Naturally, you need to have healthy gums if you’re going to keep your teeth for a lifetime, so my first priority is to help you eliminate pocketing and bleeding.

When your gums bleed, bacteria travel into the bloodstream and course throughout your body.  Eventually they end up in your major organs.  That’s why over the last 20 years or so, you’ve been hearing about how gingivitis and periodontitis are linked to heart disease, diabetes and stroke… just to name a few.  These are 3 of the top 5 or 6 (depending upon the year) preventable causes of death in the U.S.

Additionally, I want to help you eliminate pus and tighten up loose teeth.  However; since pus and mobility are less common than bleeding and pocketing, this is more of a secondary priority.

The “Take-Home” messages for this chapter:

To book a consultation at Arizona Periodontal Laser or to get a copy of the book, contact us today.